Police Misconduct and Qualified Immunity: Reimagining We the People

Changing the role of qualified immunity in police misconduct cases is paramount to criminal justice reform. So much so that advocates, attorneys and scholars do not believe America can have an equitable justice system as long as qualified immunity exists.

“Qualified immunity is used to justify terrorism in our communitites,” attorney April Fraizer Camara said during the “Police Misconduct and Qualified Immunity: Reimagining We the People” symposium funded by the American Association of Justice and co-sponsored by the Center for Justice Research, the Thurgood Marshall School of Law and the Earl Carl Center on Feb. 5, 2020. As chairwoman of Black Public Defenders Association, Fraizer Camara says the criminal justice system enables abuse of prisoners by offering extra protections for law enforcement and prison staff. “We have to talk about how the American legal system has legalized abuses. Just because it’s legal doesn’t mean it’s just or equitable.”

According to fellow panelist Joanna C. Schwartz, professor at UCLA Law, qualified immunity protects police officers and and government officials from civil suits and constitutional claims for damages, as long as the officer or government official did not violate any clearly established laws. Qualified immunity was created in 1967 and has forever changed how courts treat police in civil rights cases.

“The officer can knowingly act in the wrong, knowing there isn’t a previous case to cite,” Schwartz said.

For victims of police brutality and misconduct, receiving justice and compensation wears down on plaintiffs as they operate through the legal system. Chris Colbert, producer of the podcast Say Their Name, interviews family members and friends of Black citizens who have been killed by police. In Colbert’s experience, news outlets are quick to produce stories based off of police information alone, failing to give a voice to victims and the people who knew them best.

“Narratives about qualified immunity are controlled by the media. (Journalists) are taking police for their word,” Colbert said, noting police narratives are rarely fact checked by victims and eye witnesses.

“I see very few times where the family gets the platform,” Colbert said. “We need to take a new look at how we cover these news stories.”

Usually, it is up to the readers of crime stories to follow up on the victims because news outlets don’t always follow up after the initial story. If news outlets truly wanted to present more objective stories, they would give a bigger platform to the victim’s family and friends, Colbert said.

The added attention from news outlets compounds issues for families seeking to beat a qualified immunity case. Schwartz points out that officers have numerous other defenses that make qualified immunity unnecessary. Evidence from cases involving civil rights violations often end with officers almost having to pay nothing to victims, even if they’re found guilty.

“The Fourth Amendment says officers can make reasonable mistakes. Those protections stay if we get rid of qualified immunity,” Schwartz said. “Lawyers will take these cases, costs will be lower, and the focus will be on what the officer did.”

‍Communities rely on police to protect them and follow laws that have been established for everyone. When officers are held to a different standard than the communities they are sworn to protect, building trust becomes an exercise in futility.

Why would anyone keep faith in a system that continues to let them down?

“(We are debating) Whether or not we’re going to have a humane criminal system,” said Fraizer Camara. “Those who have faith in the system should be concerned.”

The concern over police misconduct should be especially strong in Texas, where court systems have added extra burdens on plaintiffs when it comes to police misconduct cases. Under Texas law, police departments don’t have to turn over information to victims in a case if the correlating investigation is still pending.

This extra burden on plaintiffs played a role in the case of Tony Timpa, where family members allege Timpa was killed by excessive force used by five Dallas police officers. Evidence in the case was held by the city of Dallas, preventing Timpa’s family from having access to key information that could have changed the outcome of the case. U.S. District Judge David Godbey cited qualified immunity as the reason for not charging the officers involved in Timpa’s death.

“There was body cam footage but the city of Dallas refused to turn it over because it was part of an ongoing investigation,” Schwartz said.

‍Can Anything be Done About Qualified Immunity?

All panelists in our Reimagining We the People symposium agree that qualified immunity gives officers such broad protection that it makes seeking legal recourse against police misconduct nearly impossible.

Identifying and tracking problem officers is one method that could mitigate the damage caused by qualified immunity.

“There are a lot of steps. Not a one size fits all,” Colbert said. “A public database can help us fight qualified immunity.”

Even if qualified immunity is abolished, the damage done from its legal citing needs to be addressed as well.

“We have to have a very serious conversation about reparations,” said Fraizer Camara. “What do you do to repair the harm you have done to Black and brown communities through the harm caused by qualified immunity? How do you expect someone to trust and believe in a system that doesn’t protect them?”

As the focus remains on holding police accountable for misconduct, the issue of qualified immunity is not likely to vanish anytime soon. 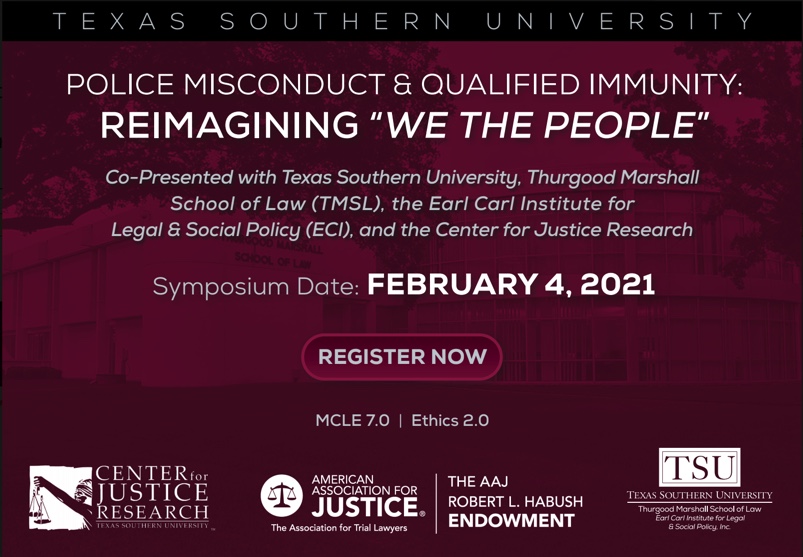 Social Justice Through the Arts