Americans are demanding changes to law enforcement protocols as a response to the epidemic of police misconduct. Bills are being developed at the federal, state, and local levels, with much of the legislation pointing to the murder of George Floyd as the sentinel event for the reimagination of policing.
‍
The Center for Justice Research at Texas Southern University is playing an active role in this discussion with the formation of our National Police Reform Advisory Group, a collective of scholars, practitioners, and community members, most of whom have police training experience. The group’s recommendations for our Action Briefs calls for common sense reforms that protect citizens and hold officers accountable for misconduct at all levels, while simultaneously protecting public safety. 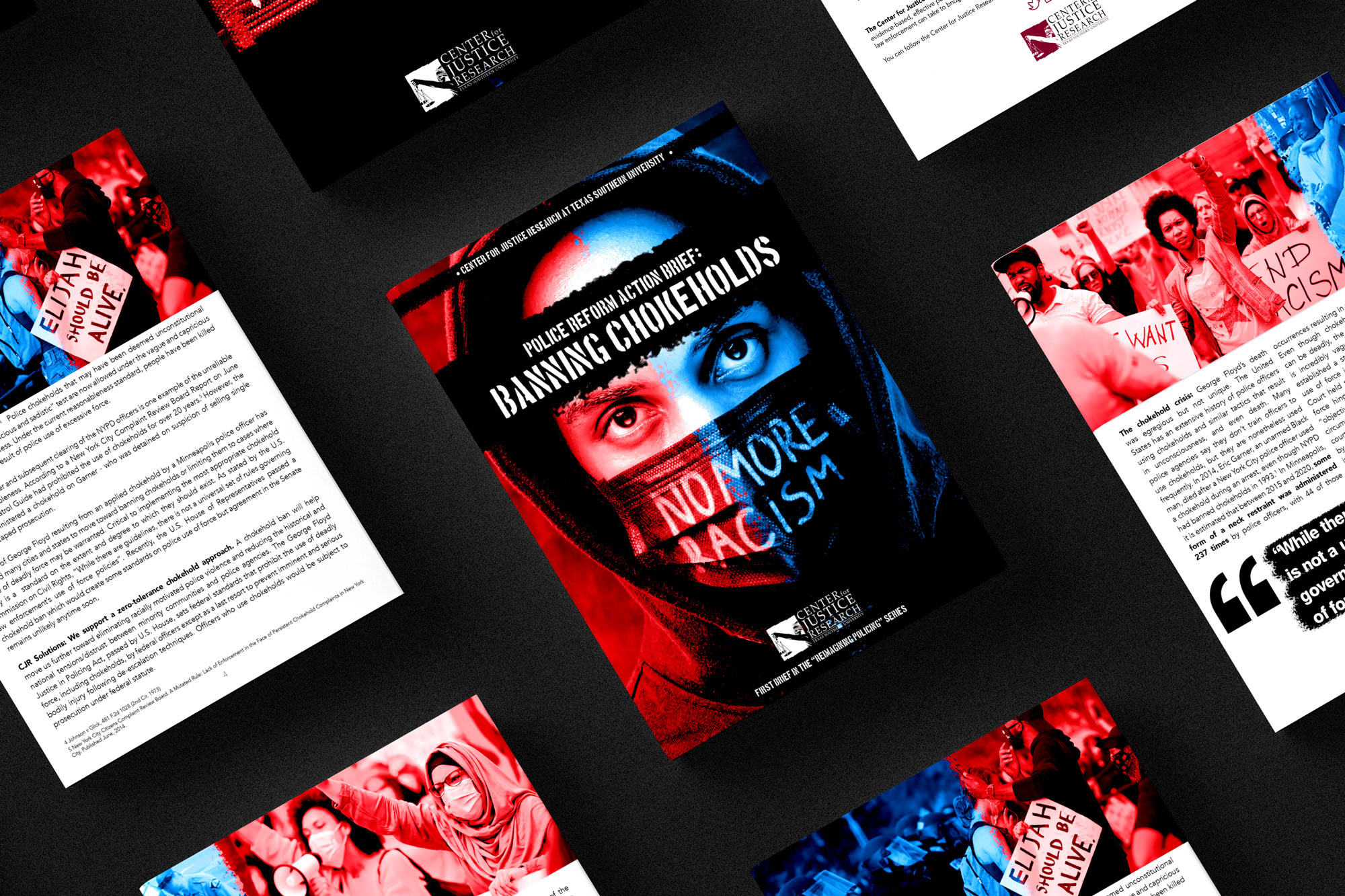 The Center for Justice Research (CJR) at Texas Southern University supports innovative, data-driven solutions to create an equitable criminal justice system. CJR is the premier criminal justice research center located on the campus of a historically Black college or university. Our researchers offer an important voice at this crucial time. This is the first in a series of action briefs on police reform. 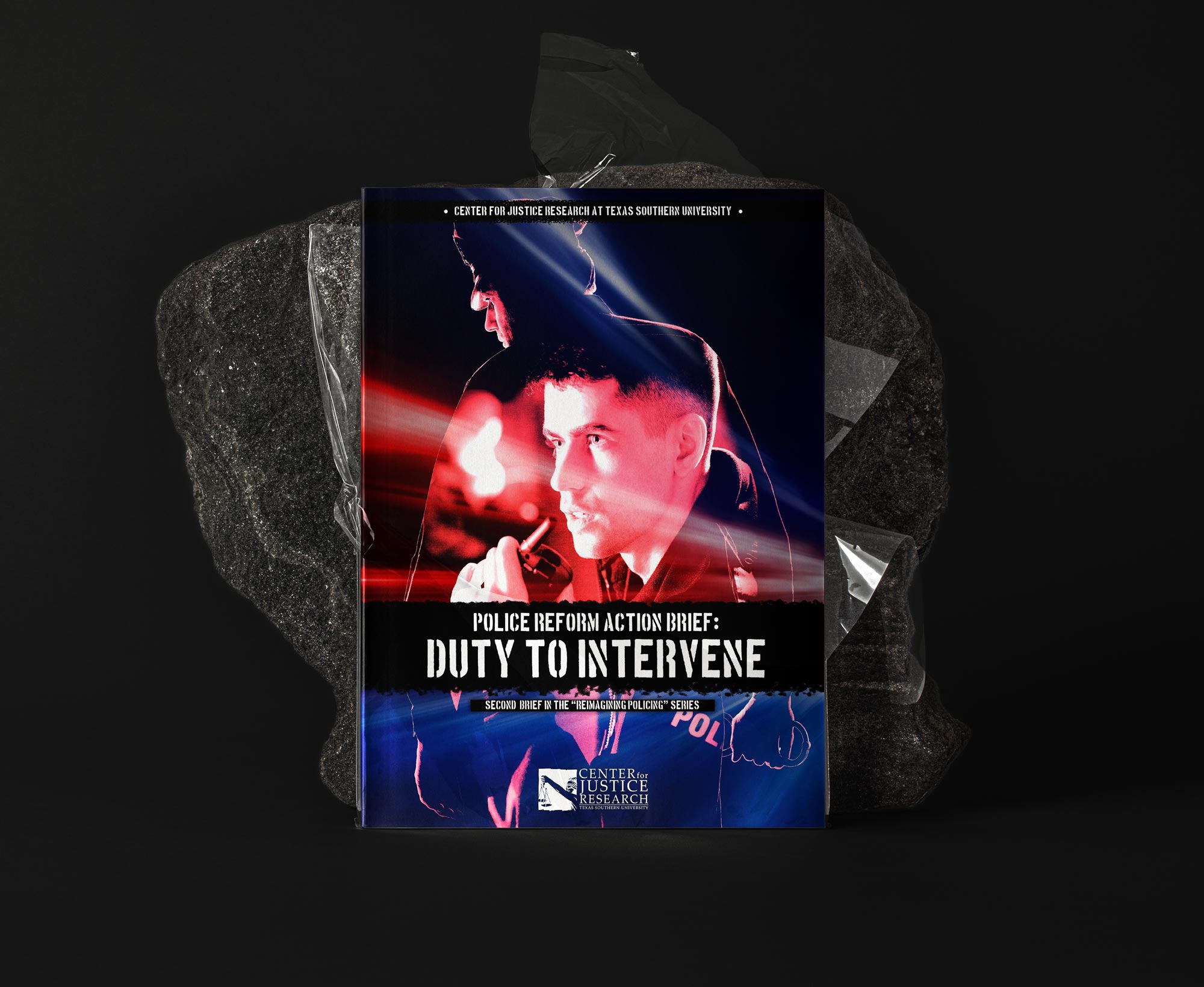 Laws and policies are necessary to direct officers to intervene in situations of excessive force. Maintaining safety is achievable, but only if officers (a) have an explicit responsibility to intervene, (b) stop the excessive force, and (c) face severe consequences for failing to do so. It is clear that actionable, national-level policies are needed. Absent a standard, Americans, particularly historically marginalized groups, risk the severe threat of harm and even death, as many recent events happen. This is the second in a series of action briefs on police reform. 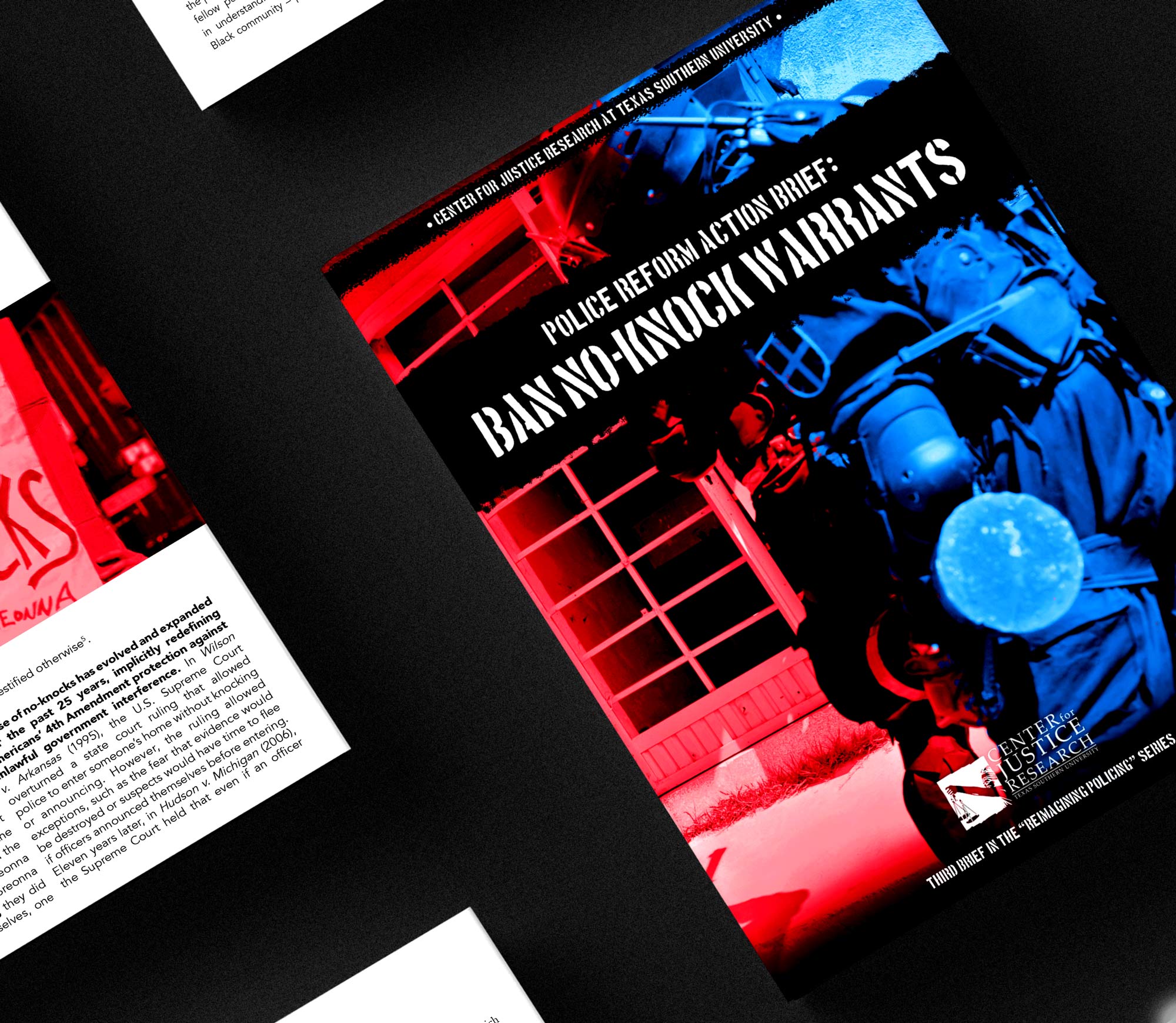 As Americans, we enjoy the privilege of privacy in our home and freedom from unreasonable government invasion. In theory. However, in the Breonna Taylor case, a Circuit Court judge signed a no-knock warrant permitting police to enter without announcing and identifying themselves as law enforcement officers. In light of the tragic and horrendous events surrounding the deaths of Breonna Taylor, Michael Santana, Anthony Diotaiuto, Marcus Cass, and many others, the Center for Justice Research supports a national ban of no-knock search warrant procedures. This is the third in a series of action briefs on police reform. 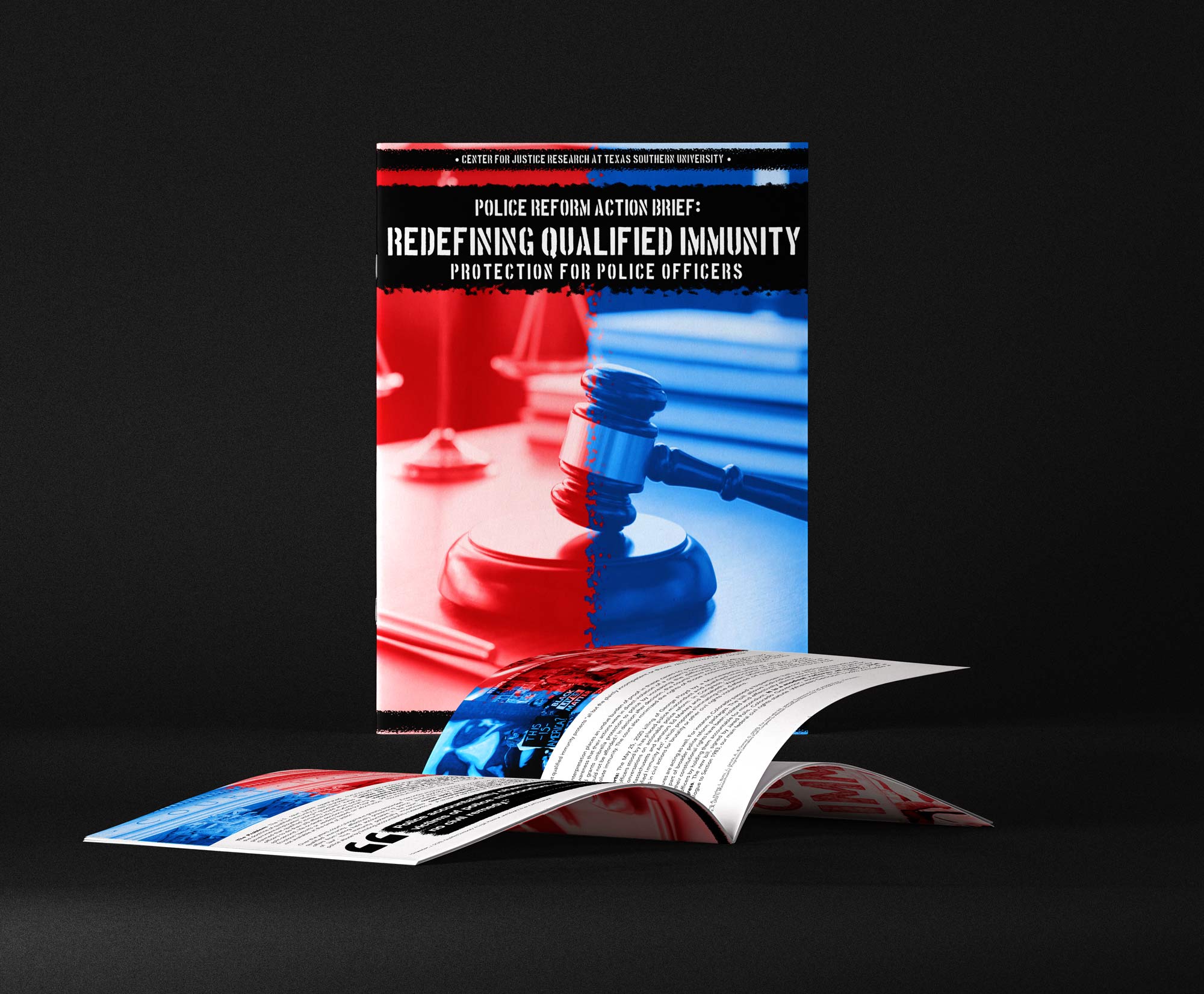 The Problem: The U.S. court system established the doctrine of qualified immunity in 1967 to protect government employees “acting in good faith.” It was claimed that qualified immunity would allow police officers to do their job effectively, including making split-second, life-or-death decisions without fear of frivolous lawsuits or verdicts based on information not available at the time of action. Over the years, court rulings have greatly expanded qualified immunity, effectively preventing police offers from being held accountable in the court of law. This immunity potentially incentivizes police abuse by limiting accountability measures, a common perception that has yet to be empirically validated. The exercise of qualified immunity inflates the power of law enforcement and adequately deflects the actions of officers that violate the civil rights of others. This loophole of police accountability often leaves victims of police misconduct with no civil remedy. This is the fourth in a series of action briefs on police reform. 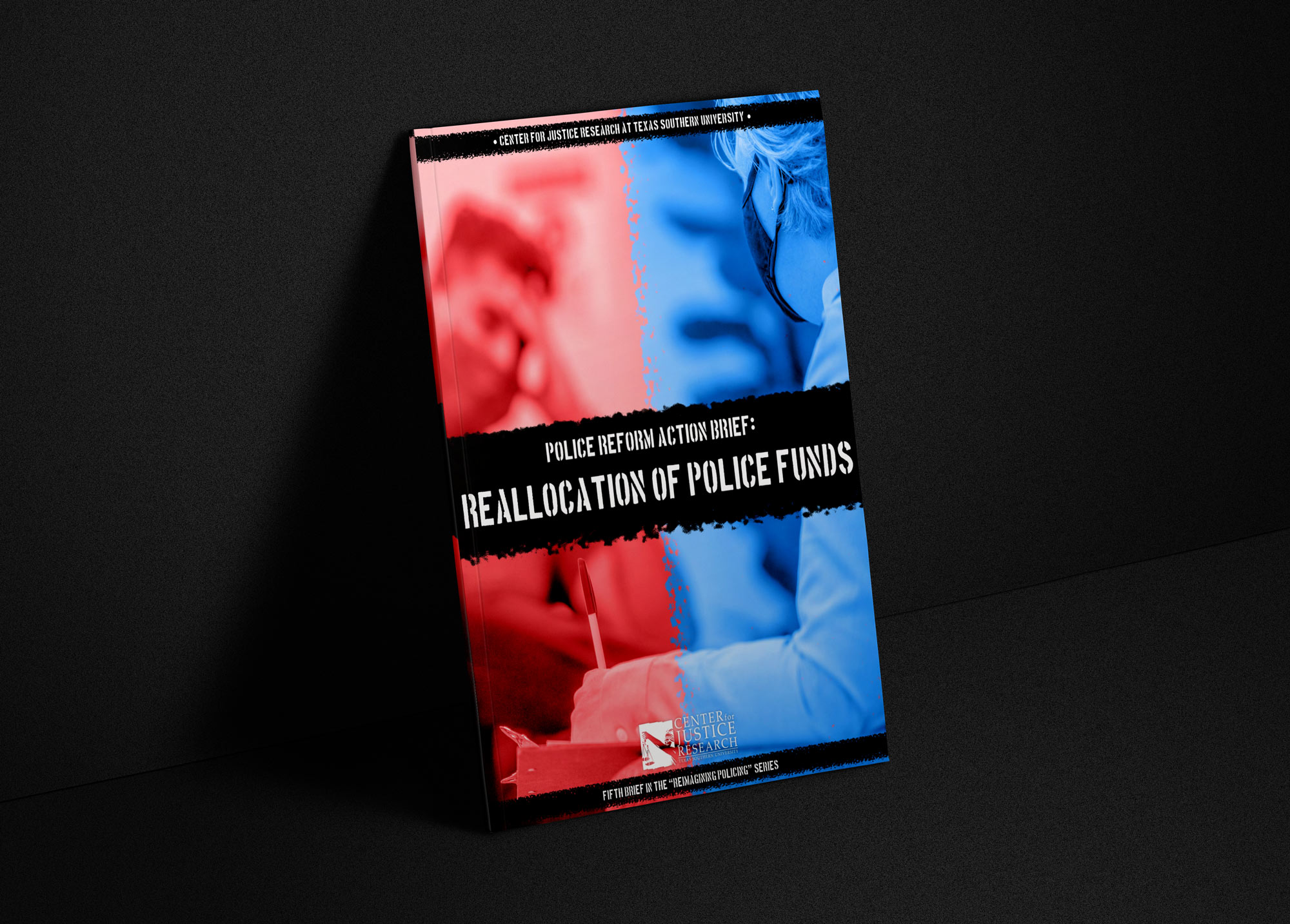 The many killings of unarmed African American residents by police officers during 2020 have increased national awareness of the consequences of forceful over-policing tactics in predominantly Black communities. These senseless deaths have prompted a burgeoning call to “Defund the Police” –of which, chanting echoes can be heard across the nation. Although the differentiated interpretation of its meaning and purpose – reallocation vs.dismantle – has persisted, the defund the police messaging has led to honest national conversations and debates on federal, state, and local funding for police departments. According to a Popular Democracy report, between 20% and 45% percent of local municipality discretionary funding is allocated toward law enforcement departments. A Bloomberg report found that since 1977, the United States’ policing budget has nearly tripled to $115 billion, despite the decrease in crime.2 In another report examining state and local budgets spanning 60 years, Bloomberg found no significant relationship between increased police budgets and a crime reduction. This is the fifth in a series of action briefs on police reform. 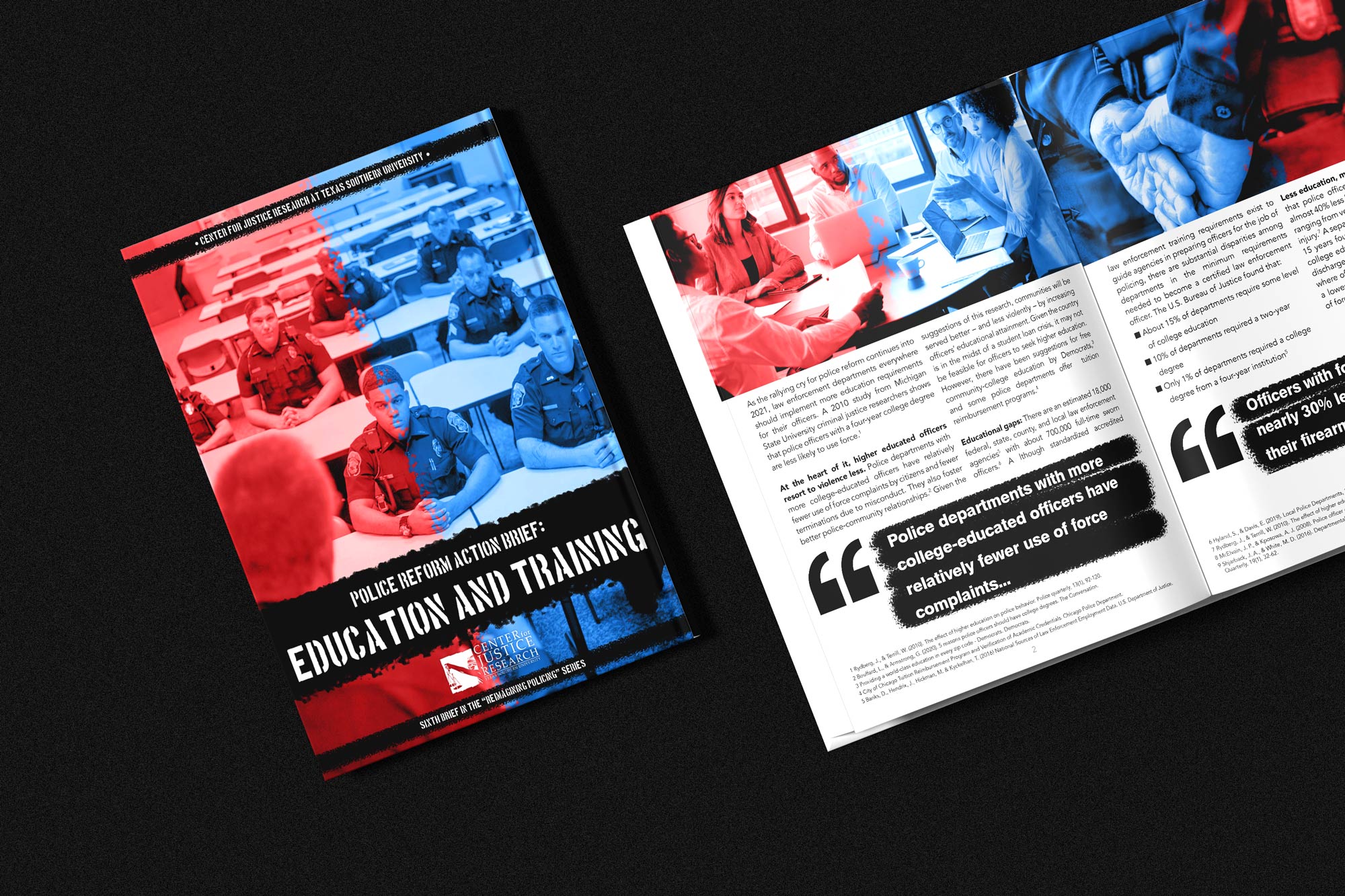 As the rallying cry for police reform continues into 2021, law enforcement departments everywhere should implement more education requirements for their officers. A 2010 study from Michigan State University criminal justice researchers shows that police officers with a four-year college degree are less likely to use force. At the heart of it, higher educated officers resort to violence less. Police departments with more college-educated officers have relatively fewer use of force complaints by citizens and fewer terminations due to misconduct. They also foster better police-community relationships. Given the suggestions of this research, communities will be served better – and less violently – by increasing officers’ educational attainment. This is the sixth in a series of action briefs on police reform. 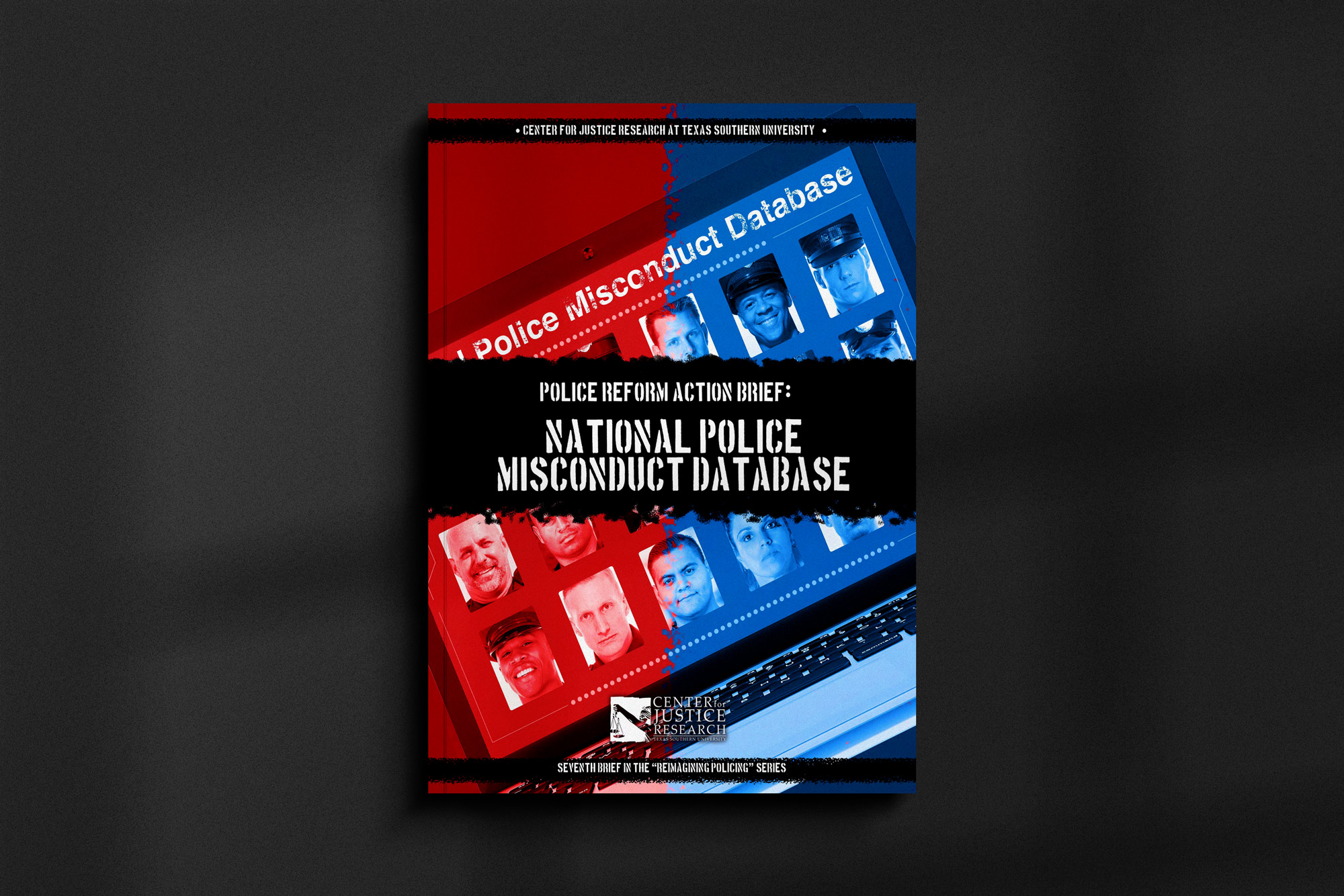 As police leaders pledge to reform and weed out “bad apples” within their departments, it has become more urgent than ever for law enforcement to have a formal, wide-reaching system in place to identify police misconduct. There are 697,195 full-time sworn law enforcement officers employed in more than 13,000 local police departments throughout the U.S. Federal statute defines police misconduct as the excessive force, sexual assault, intentional false arrests, theft, or the intentional fabrication of evidence resulting in the loss of liberty to another. Strikingly, however, there exists no formal national database that records officer misconduct and the police officer’s resulting resignation or termination due to misconduct. Consequently, law enforcement officers guilty of serious misconduct can find employment at different agencies after they have been fired or resigned due to the unavailability of a national database. Since 2006, approximately 24% of fired police officers from some of the largest police departments have been reinstated. It’s worth noting some of the police departments were later required to rehire the officers they fired. This is the seventh in a series of action briefs on police reform. 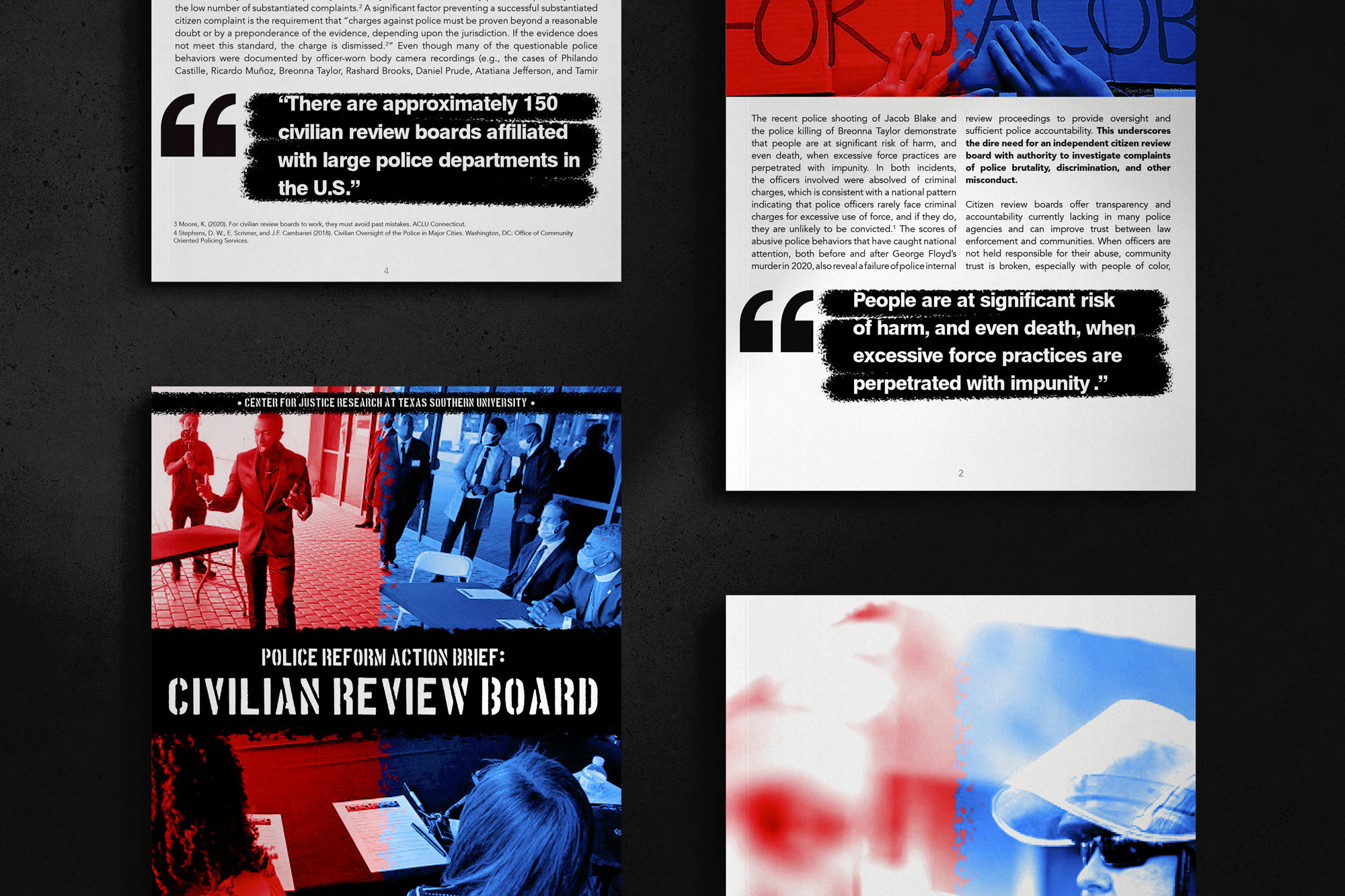 The recent police shooting of Jacob Blake and the police killing of Breonna Taylor demonstrate that people are at significant risk of harm, and even death, when excessive force practices are perpetrated with impunity. In both incidents, the officers involved were absolved of criminal charges, which is consistent with a national pattern indicating that police officers rarely face criminal charges for excessive use of force, and if they do, they are unlikely to be convicted.1 The scores of abusive police behaviors that have caught national attention, both before and after George Floyd’s murder in 2020, also reveal a failure of police internal review proceedings to provide oversight and sufficient police accountability. This underscores the dire need for an independent citizen review board with authority to investigate complaints of police brutality, discrimination, and other misconduct. This is the eighth in a series of action briefs on police reform.

Dr. Warren V. Dukes is currently the Vice-President of Diversity, Equity and Inclusion at the United Way of Central Indiana. Formerly a Sociology Lecturer and Director of Undergraduate Programs in the Department of Sociology at Purdue University. Warren’s prior research on Black police officers gained the attention of national law enforcement executives and members of President Obama’s administration, as he was an invited participant in the President’s Task Force on the White House 21st Century Policing Briefing.

Jennifer Wyatt Bourgeois is a Postdoctoral fellow at the Center for Justice Research at Texas Southern University. Jennifer has been published in the Journal of Black Studies, Lone Star Forensic's, and Drug Science, Policy, & Law. Additionally, she has co- authored two nationally recognized reports in the areas of pretrial diversion and prosecutor caseloads.

Chris Andrews is a former journalist who covered state government in Michigan for more than 20 years.  As a communications consultant, he has written extensively on criminal justice, juvenile justice, and race equity issues. He has his bachelor’s and master’s degrees from the University of Michigan.

Dr. Paul Elam is the Chief Strategy Officer for MPHI, a Michigan-based and nationally engaged, non-profit public health institute. Paul is nationally recognized for his deep understanding of crime and justice, youth violence and prevention, and child maltreatment. He brings a wealth of knowledge and experience measuring racial and ethnic disproportionality and believes that sound public policy analysis should include an examination of whether all people are being treated fairly and equitably.